So I had thought that with the Fantasy swamp level, that the texture used wasn’t mine. So I finally had a good proper look and it turned out when my partner was snapping the level together while I was away (when it was due in the next day) so I wasn’t there to make sure it was my texture. So today was the very final day to get all our stuff in so I quickly fixed up the little error and re-exported a game exe and web build of the game, I have also updated the web build on this site.

So last night I got in the mood to do some 3D work, making another item for Worms Clan Wars. This time it was a tall object that they pull out randomly every now and then, and it had been a while since I had done anything for Worms Clan Wars so there was a few mistakes here and there.

First I started with Army Hat of some type with a hand painted texture…didn’t turn out so well texture wise, but then I remembered I had an unused texture for another project I did very early on my first year at AIE which I thought looked heaps better. It did look a lot better, and I knew why. The first time I hand painted an Army camouflage, I used a reference to get down the shapes and stuff and in the end came off really nice. The time I attempted (last night) I just got the colours and did random patterns and stuff…didn’t work out how I wanted to in the end.

So I threw them into the editor, it didn’t work and at the time I had no idea why when I went back and forth to see if anything was to change..it didn’t, so I went oh well I wont delete it just encase. So I went into my bedroom and saw a Cyanide & Happiness plush and thought hm, that is a pretty simple design I will give that a go as I had never made a tall object/asset for Worms Clan Wars.

So everything went well, smashed it out pretty quick its only a sphere and a few cylinders to make it up and textured it pretty fast due to it being a total of 2 colours in total. So the template you use to make sure you are doing it right made no sense to me at all so it took me a little bit to it finally worked (turns out if I just had it in the middle/center and deleting the template all together worked best) but finally I had it, after a few tweaks here and there.

It can be viewed/downloaded/rated here 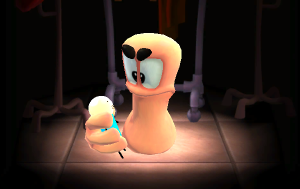 So today we had to get everything done instead of 1-2 weeks away (like I thought originally) sadly I didn’t get every little single thing we had to do but our teacher said Monday it could be handed in, I only had a few things to write up anyways.

So the reason this for this title is due to the backdrops I made, I’m unsure how I didn’t think about it before but having the backdrop images wouldn’t of made sense due to the trees are cut off at the top and then the skybox wouldn’t of blended in with it (or would take a fair bit of effort to work or its just not possible). And also I attempted to make a skybox, it didn’t work at all so I saw how other cubed skyboxes were and attempted to paint my own and muck around in Unity to see how and if I could make a working one….It didn’t work and gave up and moved onto something else 3D related (working on my own little scene I started a while back).

So seeing our stuff had to be in today, we just used a default moonlight Unity skybox but it looks pretty good and the whole scene turned out very nice. I will hopefully get the web version up on here tonight or tomorrow sometime without much trouble, I do have an idea on how it may work but things don’t always like to play nice.

Well today I’ve got to render out one of the backdrops I’ve done and make a skybox. I’ve already done one backdrop but it hasn’t been tested in Unity or with the terrain, due to my partner who I’ve been working with for the fast 4 or so weeks has been away and haven’t had access to the updated Unity file. Until just yesterday he was having trouble moving the project from Uni to home so I had an idea and gave him a few instructions, it at least now opened but it appeared we had to import the assets again which isn’t too much of a big deal and wont take very long.

But all that we are really missing is the backdrops, which are just scenes that are made in Maya and using the assets we made for the level project and to act as it appears the swamp is bigger then it really is and so it makes a bit more sense that your not just staring into empty space all of a sudden (at least that’s the idea). So I’m marking it as work in progress due to I don’t know if I need to back the camera off as it might not really fit into the game very well and seeing as its saved as a png I have no background behind it, so I will need the lighting information from the game level  to fit with the image to hopefully fit with the rest of the level. I will be having 2 different backdrops, one that clearly shows its blocked off and you have no access, the other will be where you start (behind you) and even though its clear you cannot go into it, it has a path to give you some idea what direction you came from (as shown below).

Also as I’ve never posted about the swamp project, I will keep pretty short. We got put into teams 2 artists and 1 programmer (some 1 artist to 1 programmer) and our programmer didn’t really have any idea’s he just said what the teacher suggested which was a “swamp”. So he wanted a fantasy themed swamp so we wrote down some ideas (added a bit too much in some cases, but got most stuff we needed done) but we had to make assets for the programmer to use in his engine that he programmed himself. Where we make our own version using Unity and export it out to a web browser version.

As for the skybox, I will be using a mix of both Maya and Mudbox. It was a technique our teacher showed us, which there is no tutorial on it of the internet (even though there’s plenty of ways to do it) but to be honest I don’t remember every single step, I think I have it all down but I’ve got this doubt that I may skip something….hopefully not! So the basic idea is you make a cube in Maya, export it out and import it into Mudbox. Then I sub-divide the cube until it turns into a sphere, from then I will paint on colours onto the sphere. In this case its going to be at night time with a very bright moon, so I will be getting an image of a moon and using but I am unsure as of yet if I want clouds. If I do use clouds I will import them into Mudbox and also paint onto the sphere, with the moon I think I will add that in later on in Photoshop and add some effects to it such as an outer glow.

Will post tomorrow on how I went, hopefully everything works out.